***Warning! This blog post is longer than my usual posts, you may need a cup of tea and some cake before reading! ***

Last weekend I went to London with my good friend, Sarah Jane, and her daughter Mia, to attend the Mind Body Spirit Festival in Earl’s Court. We stayed at her mum’s house on the outskirts of South East London, and travelled in to the centre by train and tube each day.

My first port of call when we arrived was to visit Flavia Kate, on the Spirit Visions stand, to have Spirit Strands put in my hair. I had them put in last year when I visited the Mind Body Spirit Festival, and I loved them. They had lasted a few months, and I was sad when the last one finally came out. This time I went for 25 strands in three different shades or purple, and received many compliments on them throughout the rest of the weekend. Mia also decided to have a few put in, she went for the green and silver option!

One of my favourite experiences from last year was what I call ‘the flashy light thing’, which is where you sit in a booth, close your eyes and a very bright light flashes in certain sequences, which causes your brain to create shapes, colours and patterns. It’s pretty much like an acid trip without the side effects. (I assume it is anyway, I’ve never done drugs myself!) Mia tried it out and found it to be quite interesting! It’s called the Lucia No.03. if you want the more technical details!

I went to the Conscious Ink stand, to visit my Spiritual Sister, Buckso, whom I haven’t seen in a few years. When I lived in Derby I used to hold meetings at my house for my Spiritual Sisters, but it’s been a long time since I have managed to return there to visit. I love the Conscious Ink tattoos, and was more than happy to show mine off to passers-by (though I’m not so sure they were as impressed with me flashing my belly!) I love my Believe tattoo, and many people thought it was real. If I were to be brave and get a real tattoo, it would definitely be along the lines of something like this 🙂 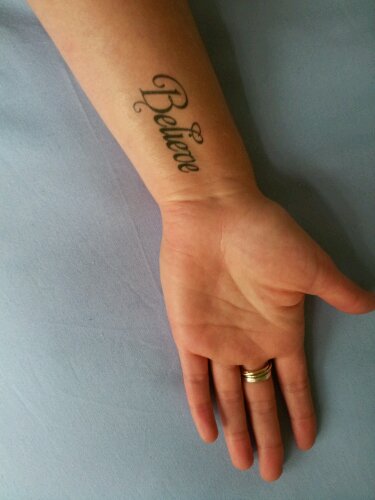 We visited the pop-up temple, and did some mantra chanting with a lovely lady of the Radha Krishna Temple. We did some singing as well, and Sarah harmonised with her, I did my best to sing quietly and not scare anyone!

Last year I met Samjana Moon, the beautiful lady of Goddess Portraiture. When Sarah and I came across her stand, it was at the end of the day, but we ignored the insistent security guards trying to throw us out and had a good long chat! Samjana’s business has grown and developed since last year, and she now offers mentoring sessions as well as the Goddess photoshoot experience. Over the weekend I wrote a list of things I wanted to do before I reach 30, and doing a photoshoot with Samjana is on the list! So I will blog about it when I make that a reality 🙂

On the Saturday, I chatted to a lovely faerie for quite some time, called Atalanta, of Atlantis Fae. She had beautiful iridescent faerie wings, and was selling her lovely wares. We realised that we had been at the same fair last year in Glastonbury, but had not managed to meet there.

A lovely angel friend of mine, Angela, text me while I was at the show to say that if I saw Kyle Gray, (The Angel Whisperer) to ask him if they were distantly related, as she had an ancestor of the same name from the same area he is from. So when I saw him on the Hay House stand, I asked him! He didn’t think they were related, but he was very sweet and said to take a photo to send to Angela to say hi. I missed his talk on the Sunday, titled ‘Are you an Earth Angel?’ which would have been very interesting to attend! Will have to try and get to one of his other events soon.

One of the things that came up a few times was how I don’t dress the part of a Spiritual Fiction author. On two of the days I wore my Earth Angel t-shirts, to promote my books, but in general, my clothing is as normal and as mundane as it gets. So Sarah and I had great fun on The Goddess Within stand, trying on some fun clothing. I particularly liked this jacket, but it was a little too small, and would have to order a custom-made one. It’s very tempting, though I would go for a purple one instead of a pink one!

What I love about the festival is the areas set aside for meditation and contemplation, here is Sarah Jane in the centre of the activity, looking quite serene!

I enjoyed catching up with my friend Taidgh of Caol Ait, (even if I still cannot spell or pronounce his name!) and a few others that I met last year at the festival. I also met up with some fellow firewalkers from the UPW event a couple of weeks ago.